It All Began With a Book Report

January 8 question – What started you on your writing journey? Was it a particular book, movie, story, or series? Was it a teacher/coach/spouse/friend/parent? Did you just “know” suddenly you wanted to write?

It All Began With a Book Report

I often quip that I began writing because it was cheaper than seeing a psychiatrist. That statement isn’t far from the truth because that’s when I began writing in earnest due to life’s frustrations. My real start, though, occurred a decade earlier.

In a tenth grade English class when I was fifteen, I had a book report assignment. We could write about a character, the plot, or the setting. I was reading James Michener’s Hawaii at the time and was enamored with his writing, especially the many pages where he detailed the setting, the formation of the islands. I wrote about the setting in about 100 words or so. I remember getting an A- for content and a B+ for grammar. It was the A- I couldn’t believe. I reread what I wrote and was surprised at how lyrical, how detailed my words were. I wrote that?

It didn’t sound like me, and yet it was me. A me that many didn’t know about. Plus, the writing was way better than anything I’d ever written before.

Rereading my words, I remembered the sensation of being taken to another place, a magical place I now recognize as the zone. Up until that time, the zone usually occurred when I was reading. Where I could be transported into a different time, a different place, where the world would fade away.

Looking back at that time now, I find it interesting that 1) neither parent ever read that report, let alone any of my other assignments (EVER.), and 2) that no one saw my fascination with words (mostly reading at that point) where they could help me move into a career that would have suited me better, far better than the path of secretary and bookkeeper, both of which I was good at. I didn’t hate the jobs, but I didn’t love them either. The jobs were a means to an end—earnings to pay the bills. Later, though, those skills would lead me into academia, which I did love.

Through the next fifty years after high school, I would write a lot, in various genres, for various audiences, and in various media. Since my creation of Sharpened Pencils Productions LLC, I have been publishing two books a year.

I have a lot of catching up to do.

So many projects, so little time.

After much pondering and consideration for her New Year’s list of 2020 projects, which includes finishing the last six of the seven Laurel Ridge novellas (covers below), Diana has chosen to finish a grammar handbook, an academic nonfiction text, and a historical screenplay based on a true event. 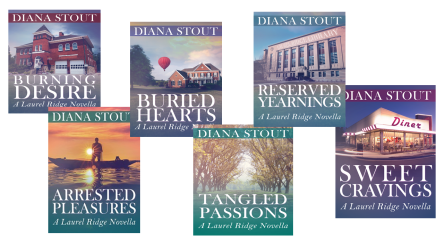 Purpose: To share and encourage. Writers can express doubts and concerns without fear of appearing foolish or weak. Those who have been through the fire can offer assistance and guidance. It’s a safe haven for insecure writers of all kinds!

Posting: The first Wednesday of every month is officially Insecure Writer’s Support Group day. Post your thoughts on your own blog. Talk about your doubts and the fears you have conquered. Discuss your struggles and triumphs. Offer a word of encouragement for others who are struggling. Visit others in the group and connect with your fellow writer – aim for a dozen new people each time – and return comments. This group is all about connecting!

1 Response to It All Began With a Book Report